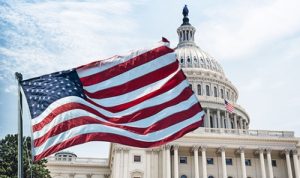 A drop in stocks and gains in haven assets like the yen and gold are textbook knee-jerk reactions to unexpected events, but once they sit down and think more clearly markets will need to consider long-term issues such as protectionism and inflation as potential dangers and a pro-growth agenda as a potential benefit when they address what a Trump Presidency may mean.

In the very short term, stock markets have opened lower given the uncertainty posed by an outsider candidate unexpectedly becoming America’s Commander-in-Chief.

Investors will also be aware of the historical patterns which show the Dow Jones Industrials has fallen by an average of 1.2% in the first year of a Republican President since 1945. In addition, the US benchmark has fallen on all four occasions in the 12 months after the White House has passed from Democratic to Republican control.

One potential straw at which markets will clutch is that the volatility may persuade a knock-kneed US Federal Reserve not to raise interest rates at its next meeting on 14 December – the central bank has already cited financial market ructions as a reason for standing pat on more than one occasion this year.

On the plus side, markets would have usually welcomed a President whose agenda includes Corporation Tax cuts and a substantial (if still vague) infrastructure investment programme, as both could boost a US economy which still appears to be stuck at stall speed.

In addition, if Trump really does try to pursue some of the more extreme policies outlined during his campaign, he still has to get them through both the House of Representatives and the Senate. And since he is by no means a classical Republican – and seems to have a poor relationship with House leader Paul Ryan – any more outlandish plans could be blocked on Capitol Hill.

The biggest long-term downside risk is posed by Trump’s protectionist, even isolationist stance, for two reasons.

First, economists agree on very few things but one point of consensus seems to be that the introduction of tariffs in the 1930s made a difficult situation an awful lot worse than it would have been otherwise. There is already clear evidence of slowing international trade flows and tariffs would be a further burden on this front.

Second, tariffs and protectionism are inherently inflationary. Rolling back the disinflation prompted by two decades of global supply chain management would spook bond markets and potentially mean central banks have to take interest rates higher more quickly than expected. The Fed may therefore pause in December but could find itself playing catch-up, if Trump does impose tariffs on imports from Asia, Latin America and Europe – a prospect which is likely to weigh on emerging market stocks particularly heavily today.

Overreacting to short-term market movements is rarely a good idea, we continue to adopt longer-term diversified investment strategies to cater for a range of possible political, market and economic scenarios, with inflation, deflation or stagflation all still potential outcomes.